This article below, by Alma Lutz for the journal Women Speaking and was reprinted in the Civil Service Journal in January 1967.

The provision in the Civil Rights Act which prohibits job discrimination in the United States on the ground of sex as well as on the ground of race, colour religion and national origin, has been faring well now that the joking inspired by the word sex has run its course.

Job discriminations on the ground of sex are being reported to the Equal Employment Opportunities Commission and are being handled with fairness and common sense.

“Help wanted” advertisements may no longer specify “male or female” help unless a bona fida occupational qualification is necessary, as in the case of an actress or masseur. It is also unlawful to maintain separate promotion or seniority policies.

As Commissioner Richard Graham pointed out to the National Federation of Business and Professional Women’s Clubs young women have been excluded from most company training programs, an unfair discrimination which retards their progress in business.

Also, because of this women returning to their jobs or professions after child-bearing are practically locked out of executive jobs.

He also explained that “misplaced chivalry” has been keeping women out of jobs in “dirty sections” of plants and in certain sections of cities.

He recommended that the states “review, overhaul, and update” their labour legislation affecting women, and he called attention to a New York law which prohibits waitresses from working after ten at night when tips are highest, while scrubwomen can work all night.

Representative Florence Dwyer of New Jersey has called attention to a common discrimination, that of a man and a woman doing similar work, but classifying the man as an executive because of his higher salary.

Some companies classify, as executives, employees who receive higher pay than rank-and-file.

This practically rules women out of the executive branch and keeps them in the low-wage field.

In Massachusetts 72 complaints have been filed by women reporting that they were discharged when they married. As a result, they were deprived of seniority rights and insurance benefits. Forty Boston waitresses have reported that the Dining Room Waiters and Bartenders Union has been discriminating against women by not considering them available for work.

They further reported that male members of the union receive $7 more a night for their work than women and work fewer hours.

A case recently won in Massachusetts was that of 11 female inspectors in a defence plant who were discharged after they reported to the Massachusetts Commission on Discrimination, that they were being paid less than men doing the same work. They were reinstated and their wages raised. 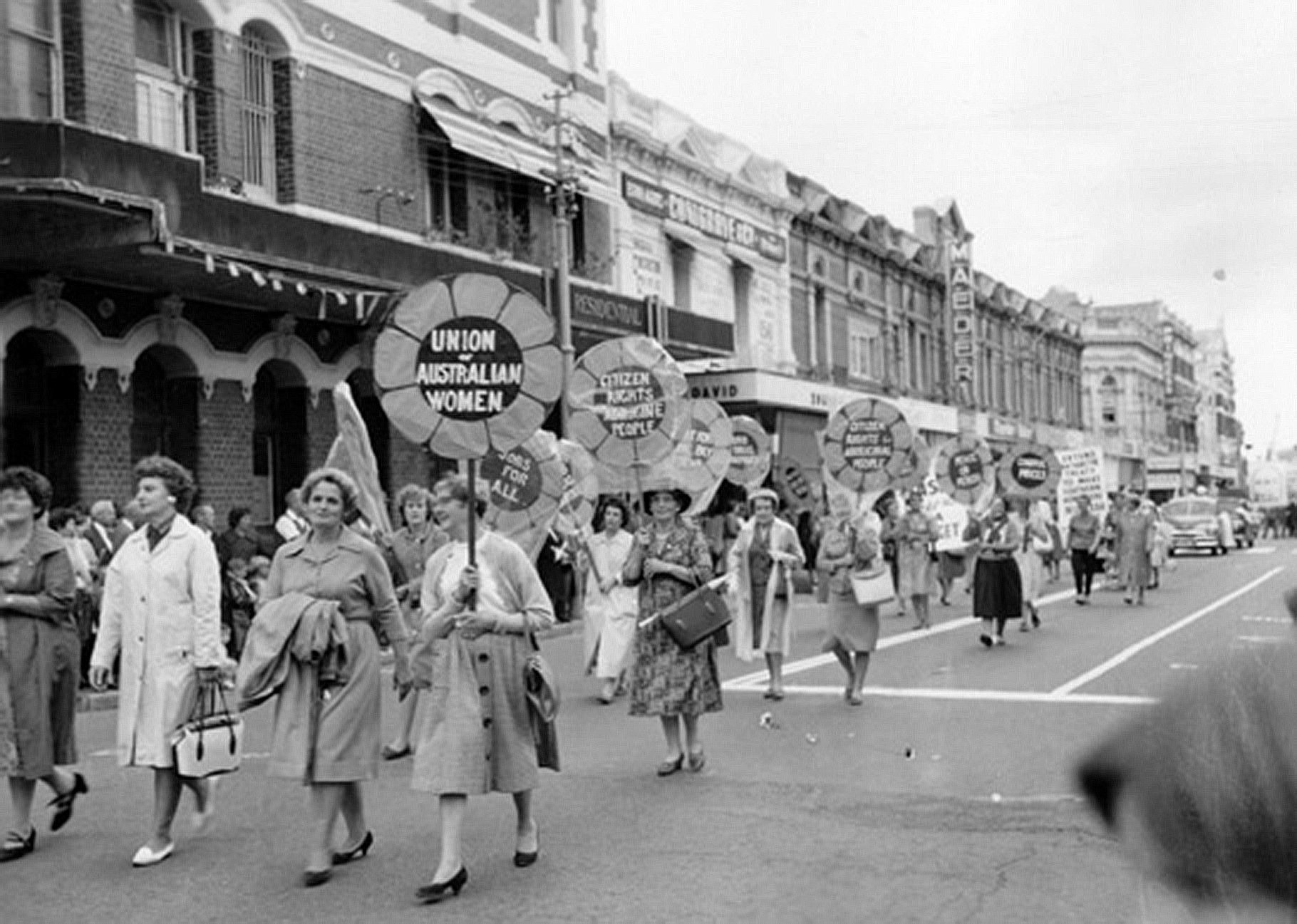 Women march for their rights in May Day parade c. 1963

Laws work both for men and women

Men are now beginning to complain that they are passed over in favour of women. This happened in the case of precision work in a factory where unusual skill was required.

It happened in Kentucky where the minimum-wage law covers only women and minors, and men asked that their wages be brought up to that minimum. This is a constructive development.

As Secretary of Labor, Wirtz pointed out recently the law works both ways, and it will wipe out the myths that have been keeping women out of certain jobs. Among these myths are the assumptions that women are only temporary workers, that they are more emotional than me and that the public has definite sex prejudices.

Not only is Title VII gradually enforcing equal pay for equal work; it is also making necessary a revision of State labour laws affecting women which are out of date and have been keeping women in a low-wage class. These laws have required certain standards for women and not for men, thus making it impossible for women to do equal work.

Actually Title VII is the most important and far-reaching measure enacted by Congress to raise the statues of women since the woman suffrage amendment. If it continues to operate as it began, in fairness and without prejudice, it will be a boon to women in higher wages and in added self-respect.

[Title VII of the Civil Rights Act, which prohibits discrimination in employment on the basis of sec, was passed by Congress in 1964 and came into operation on 2nd, July 1965, so “President Johnson in world and action has given national leadership in the task of redressing the long-standing disadvantages which have traditionally weighed against the woman who works” (quote from Mrs Keyserling, Director of the Women’s bureau, Washington).]