As we approach our 120 year anniversary we are looking back at the moments that have made working life what it is today; the wins, the fights, the battles and the members that made it all possible.

The extract below is taken from the Jubilee Edition (1902-1952) of the Civil Service Association Journal, 1952 by N. G. Hagan, J.P. General Secretary

As from the little acorn grew the mighty oak, so from equally humble beginnings developed our Association into the vigorous and solid organisation which it is today.

Acorns fall in various places; some on inhospitable ground; some in rich soil; some in nicely sheltered areas and others in unprotected regions.

Therefore some never germinate, others after a little life give up the unequal struggle whilst two types reach full development - one sheltered and carefully nurtured and the other fighting against adversity, blizzards, droughts, parasites.

Seeds of the Civil Service Association were sown from time to time either to fail to germinate or briefly to catch the light of day and to as quickly die.

Sometimes the gardeners were transferred by the landlords of the estate to far off outstations (and they were far off in those days); sometimes they were called to the inner sanctum and instructed to direct their efforts in other pursuits and sometimes they simply lost interest but...

In January 1902, the first annual meeting of the real Organisation was held and the original Council was appointed, only to be refused official recognition by the Government of that day.

However, this was eventually corrected and it was here that our present long service leave was covered by legislation.

The Government laid down that the qualifying periods would be 10 and 20 years for three and six months' leave respectively, and despite negotiations, it passed the Bill in the Legislative Assembly.

The Council approached the Legislative Council and secured the amendments now so well known of qualifying periods of seven and 14 years. 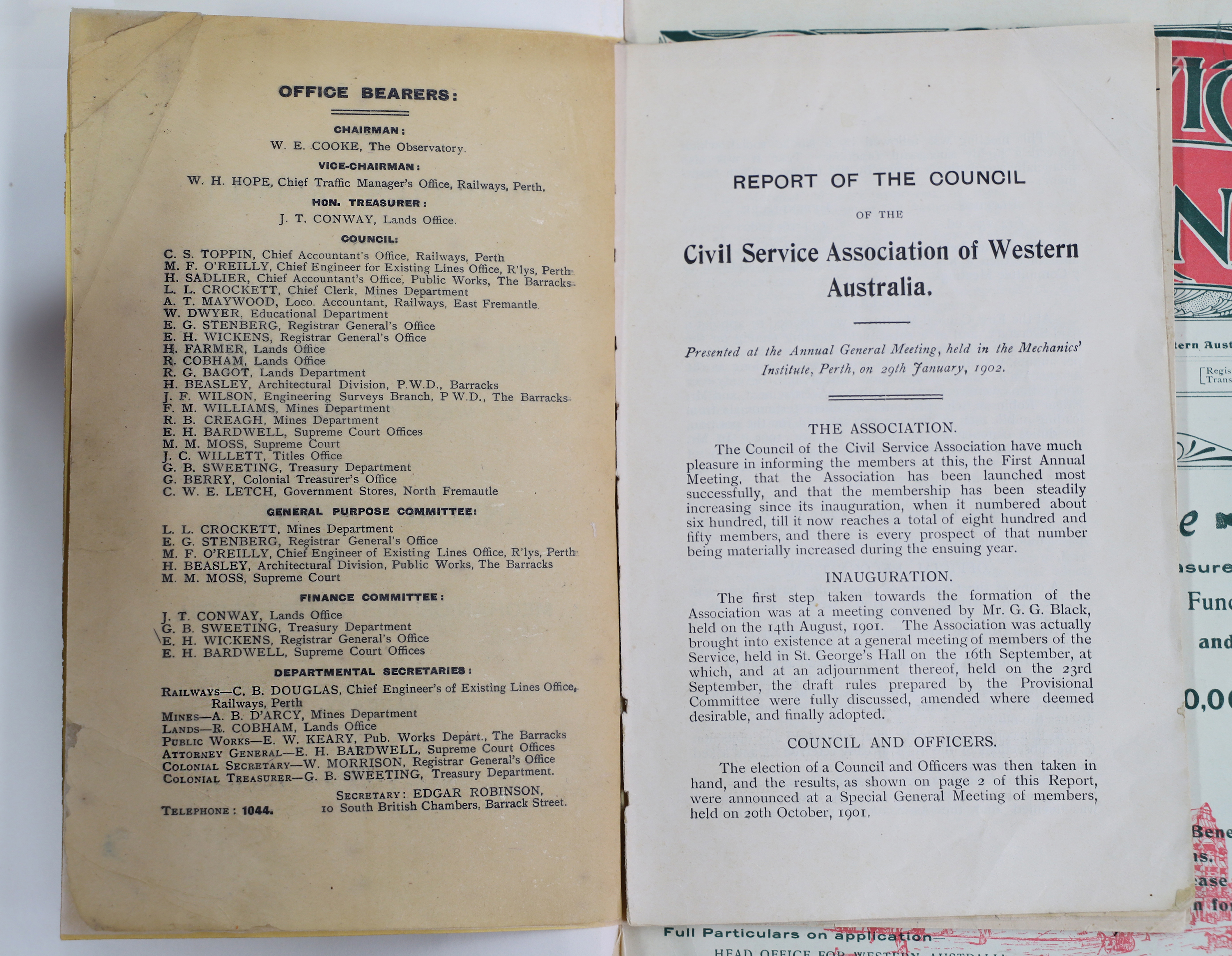 Original copy of the first Report to Council and meeting minutes of the First Annual Meeting or the Civil Service Association of Western Australian, 1902

A comprehensive Public Service Act providing for Administration by a Public Service Commissioner [previously the Governor of the State received Civil Servants on business after 12 noon four days per week, and he had sole rights of appointing, dismissing promoting, disrating, granting leave, fixing salaries, and settling disputes] and adopting a schedule of salaries with annual increments was the direct outcome of the Council's activities.

Reclassification were brought down in 1912, 1920 and 1926, but since then have taken place at least every five years. The Public Service Appeal Board Act in its present form was brought in during 1920 following the Civil Service and Teachers' Strike.

Hundreds of member enlisted for service and the Association was fully occupied in safeguarding their interests. A Civil Service War Distress Fund was established to assist the dependants of those on service, and £6500 was collected and expended (a large sum for that period).

In 1916, with the support of the University and the Education Department, the Association financed and successfully conducted the Civil Service instruction class for returned soldiers for over two years until it was taken over by the Commonwealth military authorities.

The years of economic rebuilding and progression after World [War] I culminating in practically "boom" condition in 1927-1929 to be followed by the disastrous depression years (world wide) of the early thirties.

Public Servants were the victims of sectional taxation and financial emergency reductions in salaries to assist the Government in effecting economies and the period was most grim.

As prosperity returned (not with the velocity with which poverty was hurled amongst the community, but painfully slowly) portion of the salary cuts restored.

The depression years are still vividly remembered by most members - the poverty, distress, starvation, separations - to need detailed recapitulation here.

The Association, by voluntary collections from members still in employment on reduced salaries, collected and dispensed through its unemployment relief fund over £1500 to assist those more unfortunate.

In 1935 legislation was passed giving the Civil Service Association access to the Arbitration Court. This was the result of many years of effort, general meetings and finally a referendum in 1933.

Opinion on the desirability of Arbitration Court registration had been divided - such bogeys as loss of long service leave and appeal rights had been raised but the final referendum was 1391 in favour of the registration and 80 against.

The immediate gain was the attachment of salaries to basic wage fluctuations whereas previously Civil Servants were passed by when basic wage increases occurred and could only hope to pick up some of the leeway at reclassifications.

The basic wage when our first award was registered at the court was £185 per annum (1937) and now (June, 1952) it stands at £584. The court provides a place where our awards and agreements are registered and where action can be taken to have the provisions enforced.

In 1939 the Superannuation and Family Benefits Act became operative. This was a contributory scheme which enabled members to provide for a pension at retirement or for an invalidity person should they become incapacitated.

It also made provision for widows' and children's pensions in the event of the death of the member. This pension scheme had been sought by the Association together with other organisations (particularly the Teacher's Union) from 1913 until it was ultimately introduced.

Again the Empire was plunged into the cauldron of world-wide conflict and again the flower of our Public Service readily enlisted to serve the nation and empire. The navy, army, air force, nursing services, home defence and civil defence units of Australia all had a large proportion of our members.

Those who maintained the functions of civil government continues the organisation and spared no efforts to secure for their absent members the best conditions that could be negotiated for the safeguarding of their interests.

Literally hundreds of temporary officers were engaged and whilst their industrial conditions were improved, the Association was watchful that its members on active service were protected in respect to their positions, service, promotions, leave and other rights.

The organisation, as it did during the previous world war and during the depression years, organised a fund to provide assistance and amenities for those on active service. The war patriotic fund, financed by voluntary subscriptions from its members, resulted in over £7000 being made available to approved patriotic associations. 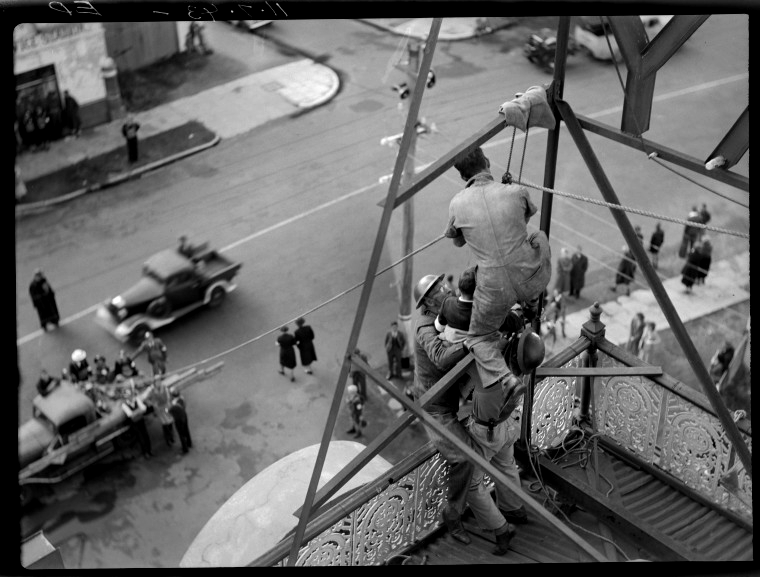 With the war concluded, victorious to the empire's cause, the Association's returning servicemen were fitting back into Civil Service and every endeavour was made to give all assistance to enable them to bridge the gap which had occurred.

In 1947 the statutory right of appeal in respect to promotions was obtained, which was the culmination of long years of negotiation by the Association. The year 1948 saw the passing of legislation to protect for members the vast amount of long service leave which had accumulated over the war years.

During 1951 the cumulative sick leave provisions were brought into operation and marks another landmark in the organisation's progressive history.

This brief survey of 50 years of existence and endeavour concludes with the fervent hope that the Association will continue its progress and continue to provide service to its members (now totalling 3,500) to the community and to the State.

N.G. Hagan J.P took office as the General Secretary of the CSA in 1945.